On This Page
What to Wear for Commencement
Ceremony Instructions
Diploma Information
Order Your Cap, Gown, Class Ring, and Announcements
History of Graduation Regalia

What to Wear With Your Cap and Gown

For undergraduate candidates, at the beginning of the ceremony tassels are worn on the right. Upon direction from the President, the tassel is moved to the left.

Graduate candidates will wear their tassel to the left for the entire ceremony.

The ceremony will begin at the designated time and last approximately two hours. All students are requested to stay until the conclusion of the ceremony.

If your name is difficult to pronounce, you should spell it phonetically on the announcer’s card.

Expect your diploma in the mail—diplomas will be mailed after all graduation requirements have been met. This usually occurs within 6 to 8 weeks of commencement.
Please keep the Records and Registration Office informed of your current address. 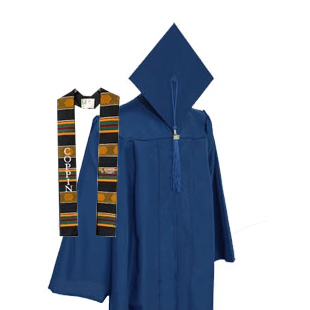 Students can order caps, gowns, and hoods online through our official vendor partner. The Bookstore also has cap and gowns available for purchase from March-May. Gowns are sized by height. Fuller cut gowns are available. Caps are one size fit all. Your cap and gown are non-refundable, and must be paid for in full when you come to pick up.

Curious about specific pricing? Visit the campus bookstore or call (410) 951-1222 for more information.

Celebrate your graduation with class rings and announcements

Faculty may also rent or purchase regalia or other items for Commencement. Check with the bookstore for information on regalia.

Why do we graduate in caps and gowns?

Coppin graduates dress in traditional commencement regalia. In the 13th century, many academic scholars, both teachers and students, wore woolen robes to keep warm in drafty classrooms. The hood was added by many of the ancient scholars to provide warmth around their necks and heads. In 1895, representatives of leading United States higher education institutions met and adopted a code of academic dress, which specified the cut and style of the gowns and the colors of the degrees.

Today academic gowns are worn in recognition of the rich history of higher education and educators. It is a worthy tradition that adds grandeur to the ceremony. Academic gowns are generally worn on special academic occasions such as convocations, commencements and presidential inaugurations.

The bachelor's degree gown is black, has pointed sleeves, and is worn closed. The gown is untrimmed.

The master's degree gown is black, has oblong sleeves, and is open at the wrist. The rear part of the oblong shape is square cut and the front part has an arc cut away. The gown may be worn open or closed. The gown is untrimmed.

The doctorate degree gown has bell-shaped full sleeves. The front of the gown has black velvet and three bars of black velvet are on the sleeves. Some gowns may also have the velvet in the color of the degree/discipline.

The Mortarboard is generally worn by Coppin's graduates. The mortarboard is black with a long black tassel. Undergraduate students wear their tassels to the right side, and when the degree is conferred, the tassel is moved to the left side.

Hoods vary in length according to the degree. Bachelor's hoods are three feet, master's are three and one-half feet, and the Doctor's degree is four feet. The lining of the hood is the official colors of the university, which are blue and gold. The trimming of the hood is usually velvet or velveteen. The color of the velvet indicates the degree.

At Coppin, we use the following hoods: