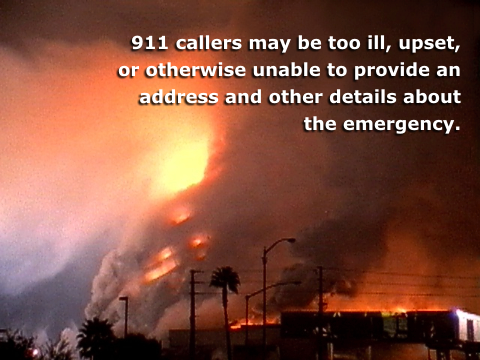 The E-911 system is an emergency alert system that identifies the specific location of the caller and directory telephone number.

Any person who dials ”911” from any campus phone will instantly be connected to the Baltimore City Police Department through the E-911 system. The Coppin State University Police Department will simultaneously receive an emergency alert with the building and location. An officer will be immediately dispatched to that location.

“Both the campus police and the ambulance staff knew exactly where to find me, and they arrived very quickly,” she said. “As a person involved in health care, I really appreciate that kind of fast, efficient response. My fellow students and I feel more safe and secure, knowing that the 911 system works so well.”

Reemell Hercules, a Coppin State nursing student who used the E911 system for a medical emergency

The University’s IT team tackled a serious problem that faces many universities and other large organizations that have centralized telecommunications systems: the inability to provide accurate location information on 911 calls.

Location information provided through a centralized PBX in a traditional, Voice over Internet Protocol (VoIP), or hybrid telecommunications environment may be either inaccurate or too general to help first responders find the exact emergency location. At the same time, 911 callers may be too ill, upset, or otherwise unable to provide an address and other details about the emergency. The result is greater risk to lives and/or property as responders spend time trying to find the emergency location.

Originally, 911 calls from Coppin State provided the 911 center with only one general location, regardless of where on campus the call originated. To address this, the University issued regulations requiring that all emergency calls be directed to the campus police, with location provided. Campus police would in turn notify 911 and meet the emergency responders when they arrived on campus. However, people still tended to call 911 directly. This resulted in the arrival of ambulances and fire trucks on campus that did not know the source location of the emergency call, and campus police could not direct them if they had not been notified about the location of the emergency.

Ahmed El-Haggan, PhD, Vice President of IT, CIO, and Computer Science Professor, commented, “In view of campus tragedies such as sniper incidents and other types of concerns faced by an educational institution, we felt that we had to find a foolproof technological solution for 911 calls. At a technology conference, we heard about an industry-wide movement toward a second-generation 911 environment that was giving rise to innovative 911 solutions. Through the contacts we made there, we were able to launch a project that ultimately resulted in a very solid 911 solution for Coppin State that is helping us achieve a safer campus environment.”

The University IT team worked with engineers from Avaya and Presidio Networked Solutions to develop their enhanced 911 (E911) solution. eTelemetry was selected as the vendor that would provide the location and alarm appliances.

The project began by updating the voice telecommunications infrastructure, consolidating 2500 TDM and IP handsets onto one Avaya Communication Server 1000E (CS 1000E) telephony platform. Then the team developed enhanced 911 with automated location information. Avaya and Presidio were responsible for the E911 design based on information provided by the University, including all phone location data, routing zone layouts, handling of E911 calls, and change management recommendations to keep switch and location information current.

The following partners collaborated to bring the E911 project to fruition.

Every day, we work to keep you and our campus safe. From reports on crime statistics to comprehensive emergency plans, to a lost and found for missing items—we're working for you.

Visit these pages to learn more about our efforts to keep Coppin State University safe and secure.