The Honors Program started during the 1980-1981 academic year by then-Dean of the Lower Division, Delores Kelley. It was created as a response to the Board of Trustees of State Universities and Colleges’ mandate that required all colleges and universities under its jurisdiction to establish honors programs.

Dr. T. J. Bryan was named Honors Program Director and served until 1990, with the exception of spring 1986 to fall 1988 when Gwendolyn Lamont served as Acting Director.

Ron L. Collins Sr. became Dean of the Honors Division and served until 2018.  Under his leadership, the mission of the program—graduate school preparation--was reinforced with the establishment of the Institute for Standardized Testing, where students can prepare for graduate school entrance exams. Towards the end of his tenure, the Honors Program mission expanded to include career development.

Have questions about the Honors Program, or about taking a standardized test for graduate or professional school? Reach out to us—we're happy to help! 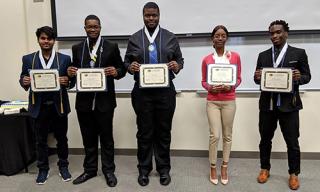